Nauticam's innovative new MWL-1 is a game-changing wet mount wide angle lens. Designed to be used in front of a housed macro lens, it allows for an approximate 150° field of view with excellent sharpness and quality.

Using a specialized double lens flip holder, you can now switch to three lens lengths; shooting close-up macro with a diopter, shooting standard macro with the 60mm lens or a moderate fish portrait type shots), or a wide angle lens with a 150º field of view.   The lens is compatible with FX DSLRs and some APS-C DSLRs, Mirrorless, Compact,  and MFT, 1" sensor compacts (see lens chart). Nauticam is continuing to test and add more lenses. The MWL-1 allows for focusing from infinity all the way to the front element, so it’s quite good for CF/WA shots. The ability to shoot wide angle and macro on the same dive is now a reality - even for full-frame DSLR systems!

I took one of these new Nauticam MWL-1 lenses for my Nauticam NA-D850 housing rig with me on our recent Optical Ocean Sales Forgotten Islands Photo Expedition to Indonesia and I'm very impressed with the results.

The lens comes in a zipped and padded soft case and includes the Nauticam bayonet attachment, including male and female parts. The MWL is fairly small with an integrated lens hood. The hood can be rotated as necessary for alignment. As the optics are high-quality glass, the lens isn’t light and weighs 2.6 pounds out of water and about 1.25 pounds underwater. A small flat port for the required camera lens is all that’s needed to add it to your rig. No extensions, zoom gears or other parts are necessary.

ravel and diving. It can replace a large 9” glass dome port, 90mm extension, zoom gear and large camera lens! This makes traveling with a large FX underwater rig much easier.

The lens couples with a macro lens, in the case of the Nikon FX cameras - the AF-S 60mm macro lens. The MWL, and a flip mount with a diopter is fairly heavy and is a bit of a challenge to get neutral.  On my NA-D850 (with lighting) I added about 5 pounds of flotation to and it became more reasonable to work with, if still a little negative. There is not a flotation collar yet available for it, so a Stix float belt worked pretty well.

I had a number of lenses at my disposal for the trip; my favorite Sigma 15mm FE, Nikon 16-35mm, a borrowed Nikon 8-15mm FE, and the new MWL. For macro, I had the standard FX 105mm VR lens and the AF-S 60mm macro to couple with the MWL. I mostly used a SagaDive +10 diopter with the 60mm as I like it’s small size and power.

The MWL handles well in the water, and the coverage is quite wide at about 150° (depending on the camera and lens used with it). It does get a little long and a bit bulky with the added flip holder, floats, diopter etc. But it’s easy to get used to and it certainly is no bulkier than a large domed lens. Having a little longer port and lens meant that I could also move my strobes forward a bit. As it is a small dome lens, sun flare was easily controllable, if existent at all, and sunballs are fairly easy to shoot.

The new Nauticam flip holders designed for it must be used, as the older flip holders aren’t strong enough to handle its weight. They are a bit stiff and I sometimes had to hold the rig against myself to flip the lens up or down.   It also focuses down to its very small dome for CF/WA. It's easy to shoot big animals, or flip over to a macro diopter for tiny subjects. This opens up a great opportunity to tell a story, creating a series of photos with different points of view.

The lens does need to be stopped down to get the best performance. Nauticam recommends f/16 and after some testing, I agree with that parameter. You could cheat it a bit to F/14, but the shots soften quickly with the high resolution D850 below that.

Comparing it to the Nikon 16-35mm, the 16-35mm lens with the S&S focus diopter allows shots to be taken easily to f/11-f/13 range. I actually find the NA-D850 to be well-balanced with a 9” glass dome and extension in the water, with only a small amount of floatation necessary. Split shots also work great with a large dome and the 16-35mm.   I will still pack a fisheye lens such as the Sigma 15mm FE, or Nikon 8-15mm FE along with a small Nauticam 140mm dome port, as I still want that super wide lens in my arsenal.

DX Mode on an FX Camera for Macro:

A 46MP image allows for a lot of cropping, and the creamy dynamic range is great. But I’ve struggled a bit with depth of field using the Nikon 105mm VR lens. I’ve had to either approach my subjects from a flat angle, so that they weren’t foreshortened, or stop way down to f/29 (past normal diffraction sharpness settings) to get enough depth of field. I wasn’t always that happy with the resulting sharpness, or lack of depth of field.

So I decided to put the D850 in DX mode and use it that way with the a macro diopter wet lens. This got me back to a very comfortable, and sharp, f/14-f/16 aperture range on the lens with greater depth of field. It’s not just a cropped image, the optics of the cropped sensor allow for more depth of field at the cost of a smaller image size.

While I don’t have a super large 46MP image, I do have a 26MP image with greater depth of field and sharpness. Which I think is a good tradeoff. I like the larger viewfinder on the D850 in DX mode as you can see beyond the image edges for framing.   It’s a nice way to use the MWL lens setup and gives you another gear to shift for macro shots. Obviously you wouldn’t want to shoot the MWL lens in DX cropped mode as you would undo most of the benefit of the wide angle field of view. 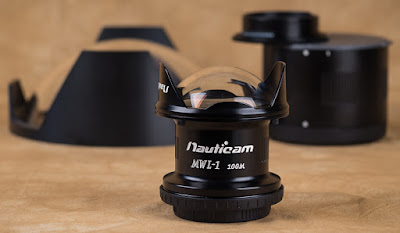 The Nauticam MWL takes the place of expensive and large heavy domes and extensions!

The Nauticam MWL wide angle lens is a versatile and compact solution to the vexing problem of housing a mid-range lens without having to carry a large dome port. It shoots quite well, and opens opportunities for mixing your shots up on the go. While it’s not inexpensive at $1850, it uses the relatively inexpensive 60mm macro lens and port that many people already have. Adding up the cost of an expensive mid-range zoom lens, large glass dome port, extension, and gears, it’s a cost-effective and smaller solution that’s travel friendly.   For a high-quality general purpose, mid-range lens solution, it might be something to consider for your underwater rig. See more shots taken with a variety of lenses with the D850 on my Forgotten Islands trip here. View all posts by: JackConnick