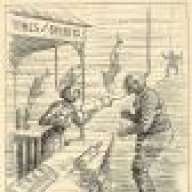 Occupation:
They say I'm an Engineer

Contributor, from Northeast US